Here's a terrific 4:00 minute history of the rise of Latino political power in New York by Marlene Peralta for HITNTelevision.


"Latinos started having a political presence in New York dating back to the late 1800s. In the 1930s East Harlem became El Barrio, and the main hub for Puerto Ricans, a community that rapidly became politically active, leadership that later spread to other local Hispanic groups."

BTW: NY's 1st elected Latino was Oscar Garcia Rivera, a native of Puerto Rico who won a seat in the NYS Assembly in 1937 as a Republican. Garcia Rivera was a Social Democrat by philosophy and a strong proponent of labor unions. It was he who drafted NYS' Unemployment Insurance Law and paved the way for minimum wage, right to organize and child labor laws.

Posted by Unknown at 9:49 PM No comments: 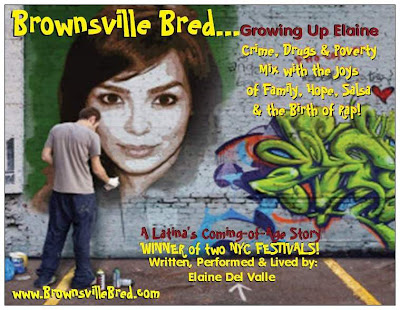 PLAYING EVERY MONDAY IN NOVEMBER AT

This autobiographical show takes the audience through an "emotional rollercoaster" that is uplifting, heartbreaking and powerful as they witness Del Valle recreate life in the tough projects of 1980's Brownsville, Brooklyn NY.

Amongst eight other characters, Del Valle narrates as herself from ages 11 to 17. Del Valle's loving father, another empathetic character, leaves the family of five as he falls from stature as a talented musician to a defeated heroine addict. Not unlike most impoverished families, Elaine's mother emerges as the loveable spirit that holds the family together and guides them to a hopeful future.

Crime, Drugs and Poverty mix with the Joys of Family, Hope, Salsa and the Birth of Rap, as Del Valle's innocence recounts a journey to womanhood, a neighborhoods crack & crime epidemic, Salsa rumbas, and her love of Run DMC, which often times help her verbalize a unique struggle and triumph that has audiences cheering and laughing through their tears while swaying to urban rhythms.

Click for more info on Brownsville Bred and tickets.
Posted by Unknown at 12:43 PM No comments:

In a moment of honesty, NYC Mayor Michael Bloomberg (aka King Bloomies) complimented Bill Thompson as "the greatest comptroller the City's ever had". Yet now that his reign as mayor is threatened, he's running $millions in negative ads distorting Thompson's record.

Perhaps, but King Bloomies simply keeping in character. After all, he's the man who called the City Council's efforts to ditch term limits, calling it SHAMEFUL, and then drove the effort himself when his presidential ambitions were blocked.

He's the man who pretends to speak for 'the people', but pushes policies that have enriched his buddies in Wall Street and Park Avenue at the expense of the City's working and middle class families.

He's the man who takes a limo to the subway.

The man whose ed policies pushes the weakest students out of the schools they desperately need and then boasts that tests score are up.

I could go on and on...but King Bloomies hypocrisy? I think so. 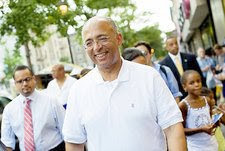 El Diario-La Prensa's endorsement (Bill Thompson for Mayor - 10/15/09) tells why all City voters must reject King Bloomies' bid for a 3rd term and instead pull the lever for Bill Thompson. en español

Excerpt 1
After a decade misspent lionizing the rich and their excesses, too many New Yorkers are paying the price for the decisions made in Washington, on Wall Street and in City Hall. What New York City needs is an executive with a balanced perspective...where families most in need are a high priority. This leader is Bill Thompson.

Excerpt 3
[Bloomberg's undemocratic maneuver he pulled on term limits] is not simply slick scheming—it is a gross abuse of power. Even Venezuela's President Hugo Chávez conducted a plebiscite on his extended stay in power.

Excerpt 4
With city government already tipped to favor the executive branch, Bloomberg’s power grab delivers a clear message: the ability of constituents to challenge power and shape decisions at the top is seriously in danger.

Posted by Unknown at 9:20 AM No comments: 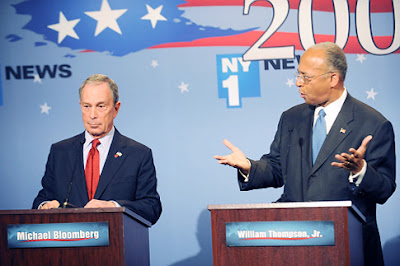 Thompson was the clear winner. He was strong, factual and assertive while maintaining in his trademark likability. On the other hand, Bloomberg seemed shrunken, uncomfortable and evasive behind that masked disdain which has been his trademark.

It was a victory for Thompson on style as well as substance. But King Bloomies kinda beat himself up with his obvious lies, misrepresentations, Republican views and strange comments. Check out some of these gems:

- Insults El Museo and Latinos w/terrible, terrible Spanish
- Lies that he's never had a manicure/pedicure
- States that the city is a mixture and not a mosaic(?)
- Raves that Giuliani would make a great governor
- Claims no one's being forced to leave NYC due to rising costs
- Way prefers Joe Bruno over Pedro Espada for Senate Majority Leader
- Suggests that Ray Kelly is indispensable
- Confides that 'friends' asked him to overturn term limits
- Misrepresented his involvement in pension decisions
- Doesn't answer if schools are 55% better (as per budget increases)
- Blatantly distorts Thompson's role w/the public schools
- Doesn't deny buying political party lines
- Doesn't deny spending $200 million to win a 3rd term
- Supporting a 'stop n search' program that targets people of color
- Claims that his $235 million in grants to city nonprofit groups did not buy him silence or endorsements; and that grantees don't even know he's the donor

No wonder King Bloomies is kept under tight wraps, the man is, politically speaking, an idiot. W/o his billions he'd never ever come close to win citywide office nor even councilman from the silk stocking district.

Eight is way more than enough for this bozo.

Click here for the full Thompson v Bloomberg NY1 Debate at El Museo del Barrio
Posted by Unknown at 9:59 AM No comments: 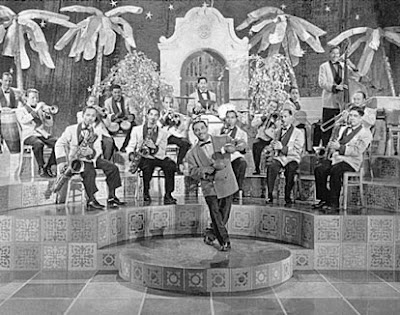 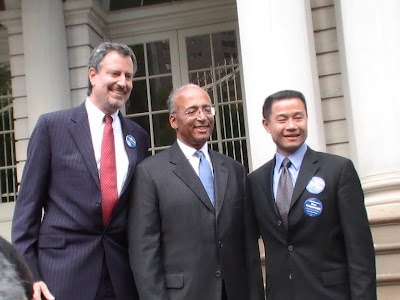 The Democratic 'Dream' Team for NYC: Bill Thompson, John Liu and Bill de Blasio. A true coordinated effort by these 3 candidates could very well trump his $millions and decide the fate of King Bloomie. Stay tuned.

Bill Thompson for Mayor
John Liu for NYC Comproller
Bill De Blasio for Public Advocate
Posted by Unknown at 11:23 AM No comments:

Vision has no boundaries,